Is film jewellery made with precious materials?

Contrary to what you may think, jewellery in films isn’t always costume jewellery. It is often made with precious metals and gemstones and custom made in the same way that we make all our unique bespoke jewellery here in London.

Why do films use precious jewellery can’t they fake it?

With the advent of new technology including HD everything that you see in film has to look real. Gone are the days when you go and see a film and the scenery is wobbling about in the background and the gladiators armour is made out of cardboard, (although I do miss those days of simplicity, they did have a certain charm). Now the actors wear impeccable designer clothes or historical costumes. It is all absolutely authentic and the jewellery you see if often precious jewellery.

Do film studios spend a lot of money on jewellery?

Film studios spend millions replicating the look that the designers and costume designers want. Costume departments are enormous with experts in their fields researching and printing fabric to replicate the time in which the film is set. It’s all hugely specialised. This is where we come in. 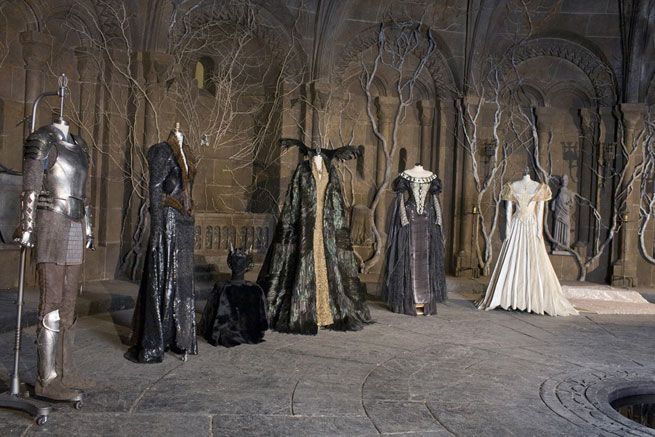 Who makes jewellery for films?

The ‘go to’ jewellery designer for film is Stephen Einhorn. Here in our Islington workshop we specialise in making bespoke jewellery and we have created some very famous pieces of  jewellery which have been worn in movies that you have probably seen. Not only do you have to have a good rapport with the costume designer but you also need to understand the culture of film. Stephen has that in his DNA (as well as a lot of other things…) He started out working as a model maker for film and TV so is very used to a film set and he knows exactly what level of skill the costume designer will need. You need to know how to make things, how to use any material not just metals. It’s exciting work, usually highly pressured, but very satisfying. Here at Stephen Einhorn we love the Oscars and are particularly interested in the jewellery – what everyone will be wearing on the red carpet, but our real passion lies in the jewellery on screen.

Which films have you worked on?

One of the many films we have worked on is Dark Shadows, directed by Tim Burton with Johnny Depp and Eva Green. We made Johnny Depp a ring which he wears throughout the film – it’s a pretty famous and iconic ring. He liked it so much we had to make a larger version for him so that he could wear the ring over his gloves and consequently wear it in every scene. We also then got asked to make the same ring for Tim Burton and the head of Warner Brothers because they wanted one too.

The ring is absolutely beautiful, made in rose gold with a large black onyx cabochon and lovely intricate designs all around including an 18th Century sailing ship. Stephen had to go to Pinewood to meet Johnny Depp and then bought back a replica of his finger made in silicone so that the workshop could make any alterations without bothering the star himself. This was leant under very strict conditions, we kept it under lock and key and were told in no uncertain terms not to let it our of our sight! Such is the power of  a Johnny Depp finger… We had to give it back after only a few days. There were a lot of jokes in the workshop… I will say no more.

Along with the ring for Dark Shadows we have made a number of other bespoke jewellery pieces that have been worn in some of Hollywood’s biggest blockbuster film by actors and actresses, including Cate Blanchett, Brad Pitt, Charlize Theron, Eva Green and Angelina Jolie. You can see all of our bespoke film jewellery here on our website.

And watch this space… Very soon we will be able to show you the bespoke jewellery we made for Tomb Raider worn by Alicia Vikander’s Lara Croft character!

A behind the scenes snap taken in our London jewellery workshops, showing the making of the...

Pieces from Stephen Einhorn’s women’s jewellery collection made the cover of both The City &...

A while ago Stephen designed and made some totally fabulous bespoke jewellery designs for a film...

We had a visit from ITV News yesterday, who filmed Stephen in our London workshop and jewellery...